What a great start to the year 2016 - new openHAB releases are available! Although it is too late for you to play with it during the holiday season, we have used the past weeks intensively to get the releases out of the door. So let's go into the details of what you will find:

As with the past releases, most efforts went into new bindings and enhancements of existing ones. To give you the statistics: There are 24 new add-ons in this release (18 of them are bindings), so we have reached a total of 195 add-ons - a truly enormous number! A big THANKS to all our community members and especially to our new maintainers, who help on reviewing, managing and incorporating the huge number or pull requests. Please see the release notes for all details and let me highlight just a few of the new features.

A binding that probably many German users have waited for is the RWE Smarthome binding, since this system is quite popular in Germany. As RWE does not provide any official open APIs for it, the binding uses an unofficial mechanism, which is not ideal in terms of latency and lacks any official support - but I am sure that it is still a very valuable feature for many users that want to break out of their walled garden.

Another interesting new binding is for LCN (Local Control Network), which is a popular installation bus for professional home automation (i.e. lights, shades, HVAC, etc.). Issendorff KG, the company behind LCN, has seen the value of integrating with openHAB and they invested the efforts of implementing an official binding for it, which nicely supports all the features and devices of LCN. All users are invited to try it out and provide feedback about it in our community. 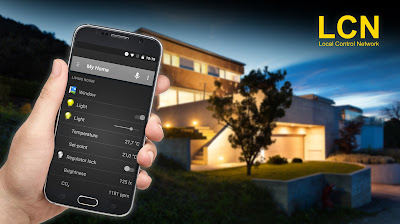 Besides the bindings, one important improvement is the replacement of the Google calender integration by a generic CalDAV integration. This makes it possible to use any CalDAV-compatible calender for triggering actions, like e.g. OwnCloud.

Work has also been done on my.openHAB, which has a much improved communication layer that should make the remote access to openHAB instances faster and more reliable. It is now also possible to send broadcast notifications to all your connected devices and you can clean up your account by deleting items that are not used anymore.

Updates of the Android and iOS apps will also follow in due course, while the Pebble app has already been updated with a couple of bug fixes.

openHAB 1.8 is the last release which comes with a runtime and a designer. While development of the 1.x branch will continue, it will from now on purely address the add-ons. Future 1.9 add-ons can then be used on a 1.8 runtime and a 2.0 runtime likewise.

This is at the same time the biggest change that is currently happening for developers: While openHAB 1.8 is the stable release to be used by end users, there is now a single environment for all developers to move forward from now on: The openHAB Distribution project. This project assembles the openHAB runtime and packages it with add-ons from openHAB 1, openHAB 2 and Eclipse SmartHome at the same time. To simplify life for developers, it also comes with a new fully automated IDE setup process, so that anybody can easily select the projects he requires and is ready to start within a few minutes. 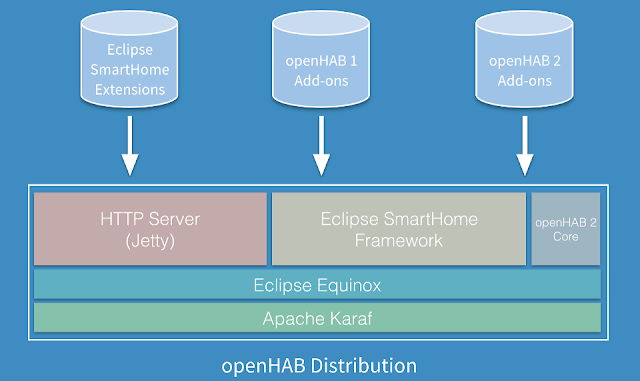 Components of the future openHAB distribution

One of the biggest changes that the 2.0 beta1 runtime brings over alpha2 is that it now uses Apache Karaf underneath. This lets us implement many features that were not possible before: We now e.g. have a proper dependency management in place for all add-ons, through which the runtime will automatically resolve and install all required dependencies of an add-on to install. The distribution also comes in two flavors: An "offline" and an "online" version, where the offline-distribution is a self-contained zip, which installs add-ons from the local filesystem, while the online-distribution download sthem from a remote repository on demand. 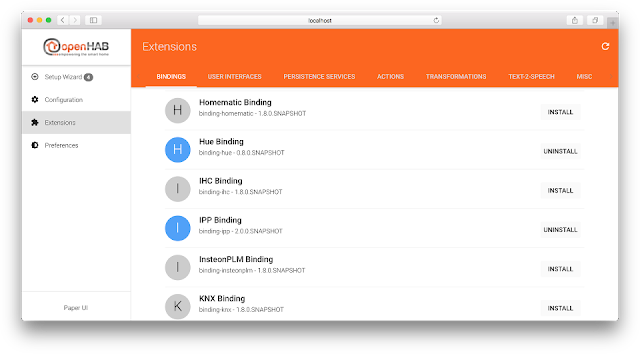 The Paper UI supports the installation of add-ons

Besides these major changes to the runtime, there are also new features in openHAB 2, like bindings for SMA Energy Meter, the Lutron system or Samsung TVs. The Paper UI has made some good progress, which you can check out in this screencast. One of my personal highlights is the new Basic UI, which is meant as a replacement for the Classic UI. Besides using Material Design instead of early iOS webapp style, it also uses the modern REST API with SSE support.

From a user perspective, the focus for now is making the transition from openHAB 1 to openHAB 2 as smooth as possible. This means that no paradigms of openHAB 1 are broken, but rather evolved. As a consequence, users are still required to use textual configuration just like before - items, sitemap, rules etc. are all configured through according files. Lowering the entry barriers for non-technical users is something that will be worked on for the final 2.0 release, but has a lower priority than offering a smooth transition for existing users.

I am looking forward to your feedback about the new distribution and I hope that all openHAB developers will join me in making it the best openHAB version ever!